The Project Evolved...Into Something Else

Who knows if anyone even looks at this blog anymore.  While I stopped updating it a long time ago, I never stopped working on the game.  Well...technically, I did stop working on it.  It evolved into a whole new game.

The new game is called "Mages & Mercenaries: The Curse of Eternal Darkness."  It has a turn-based combat engine similar to the Gold-Box games.  I won't say much else about it, but I will upload some images... 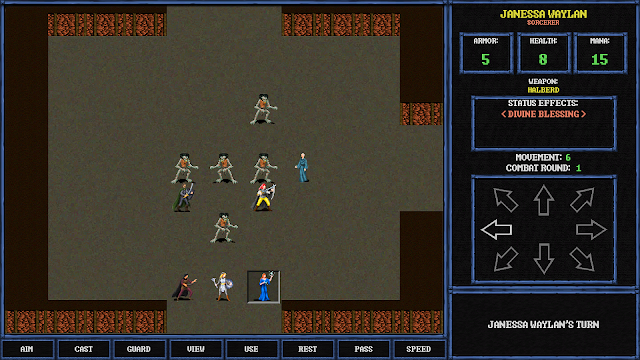 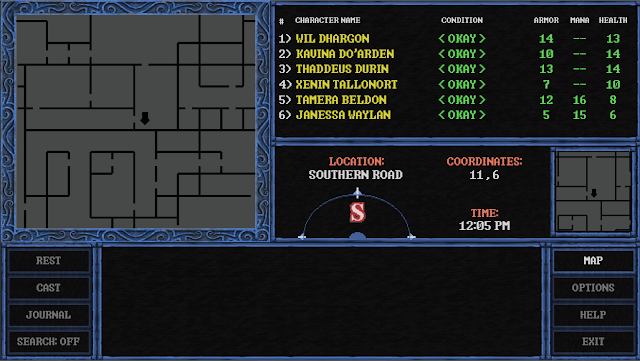 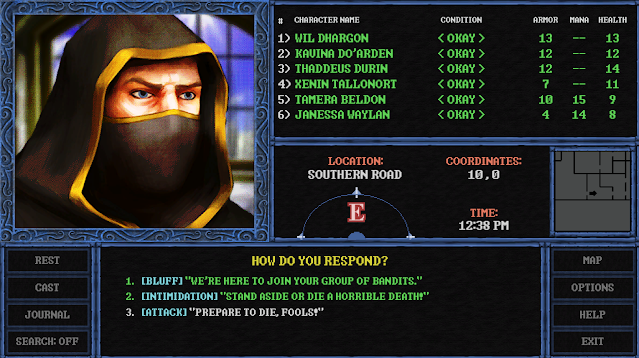 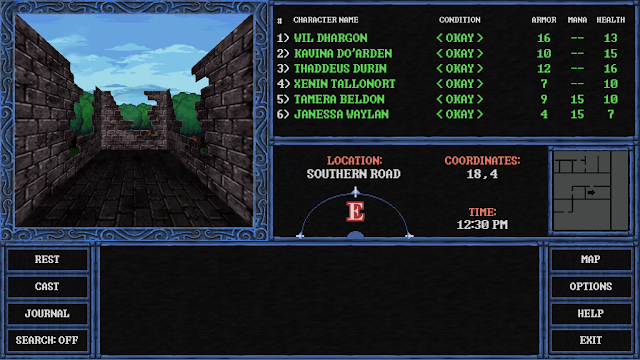 As mentioned in my previous post, I had started working on a new project in December of 2015.  This new project (currently unnamed) uses many of the assets of "Lands of Adventure," and utilizes all the things I learned during the five different times I tried to build that game.

After nearly a year of work, I am ready to start releasing screenshots and start talking about my intentions for the game.  Like LOA, I intend this to be a throwback old-school CRPG, reminiscent of the kind of games that were developed in the late 1980s and early 1990s.

This time around, I'm also providing a lot of my own artwork to the project (all walls, floors, grounds and skies were done by me).  This helps give the project a style that is consistent.

So, here are the screenshots.

First, the main town, shown here both in the daytime and at night: 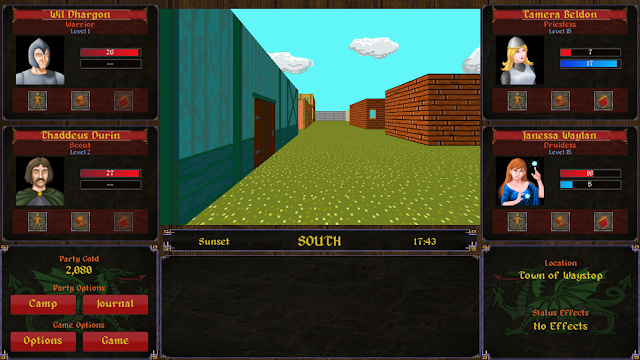 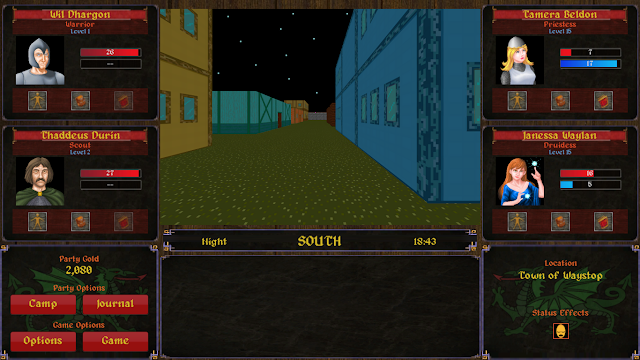 When talking to an NPC in the game, players will see a screen like this: 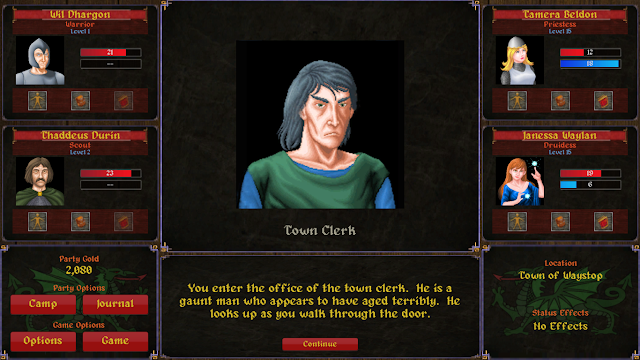 Here's a look at one of the character screens: 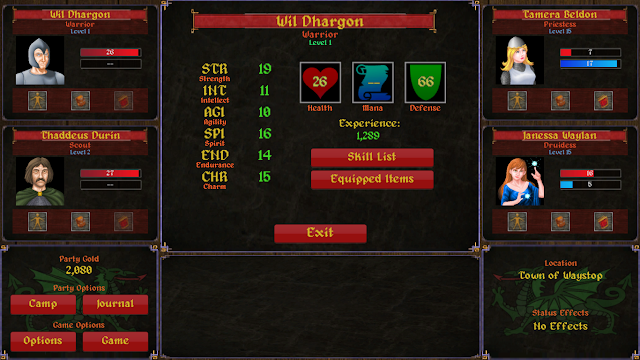 Combat in the game is very similar to the way it appeared in the very early versions of LOA.  I choose that style because it was easier to deal with and it keeps everything in the same screen space.  I'm also including the victory page that is seen after the combat ends: 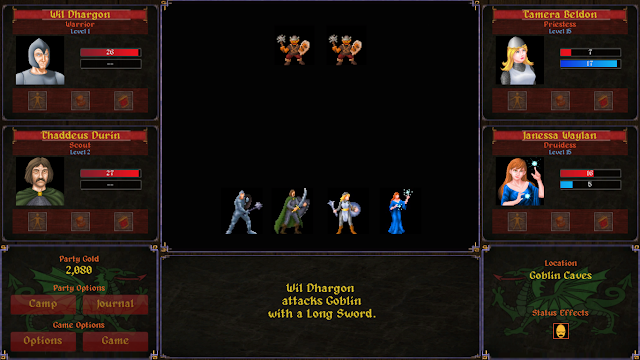 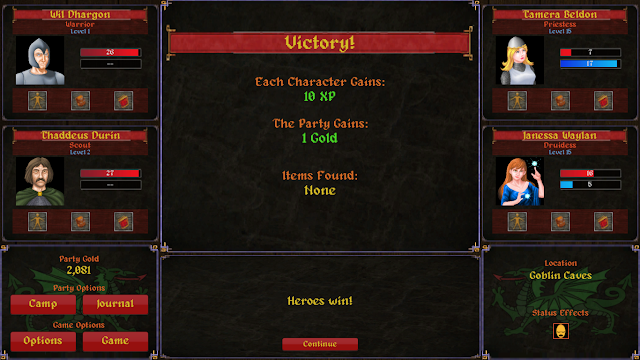 And finally, some random shots of the first dungeon in the game: 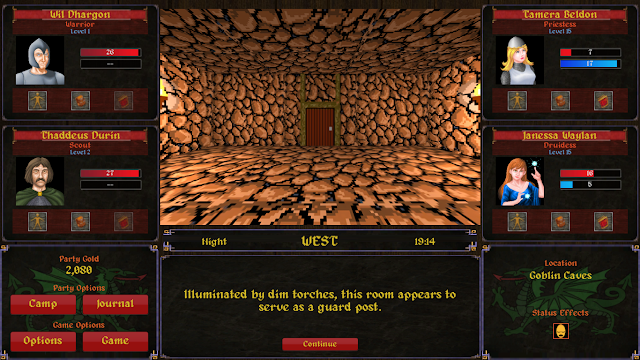 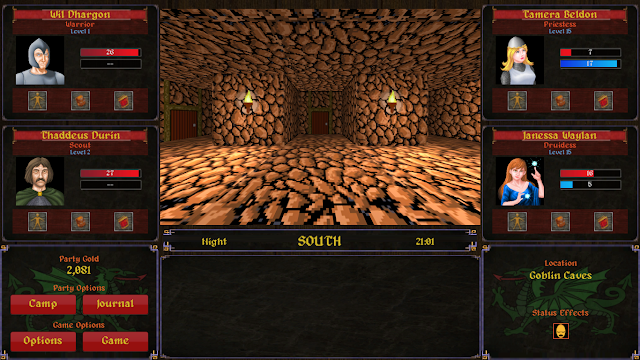 As always, any feedback is appreciated.
Posted by The Enraged Geek at 7:37 PM 8 comments:

It's been quite a while.  I haven't updated this blog or the game itself in almost a year.  For a while, I was starting to think that the game might be dead.

Over the past year, I finished school and got my B.S. in Software Development.  I joined a group of other developers in the hopes of creating a video game.  That group fell apart rather quickly, and I joined another group of developers who I have been working with on two different games.  That group has potential, and I hope we see the game to completion.

In the past six months, I also did some work on another video game just for fun.  And a lot of the things that I developed for that game are things that I am going to put to use in Lands of Adventure.

So, I'm back now, working on LoA.  Hopefully, I won't get derailed again.

One of the things that I developed while working on the other unnamed game was a day/night cycle routine that tracks the time of day.  When appropriate, it changes the sky color and the light settings and makes it possible for torch light to operate.


During the daytime, the sky is a bright blue, the ground and the buildings are brightly lit and the torch lights cannot be seen.  Compare this to the nighttime scene below:


There is a huge difference.

The walls I'm using are very Gold-Box like in style.  I developed them for the other game, but have moved them over to this project, as they fit the art style I want to utilize.

So, things are starting to move again.  Let me know if you have any comments.
Posted by The Enraged Geek at 1:25 PM 6 comments:

Here's yet another combat engine video.  This one shows the engine as nearly done:

https://www.youtube.com/watch?v=Umfwf6Rh-7Y
Posted by The Enraged Geek at 3:18 PM 1 comment:

Another video of the combat engine that I threw on YouTube earlier this week.  In reality, the engine is further along than even this video shows.  But, I realized I hadn't posted a link to this here yet, so I figured I should update anyone who might be checking this blog out (all two of you).


Posted by The Enraged Geek at 9:55 PM No comments:

The combat engine continues to come along nicely.  Here's a video, which I hope will give you all a feeling of the classic Gold-Box style combat:


More updates later.
Posted by The Enraged Geek at 10:02 AM No comments:

Evolution of the Combat Screen

Work on the combat screen continues to proceed at a very fast pace.  You can compare this screenshot to the one I posted a few days ago.  Players can now move their characters in 8 different directions using the number keypad (or in 4 directions with the arrow keys).  Monsters are being rendered, and there are attack actions being taken whenever the program detects a collision between a player icon and a monster icon.


That's all I really have for the moment.  I think it's kind of exciting.
Posted by The Enraged Geek at 8:11 PM No comments: